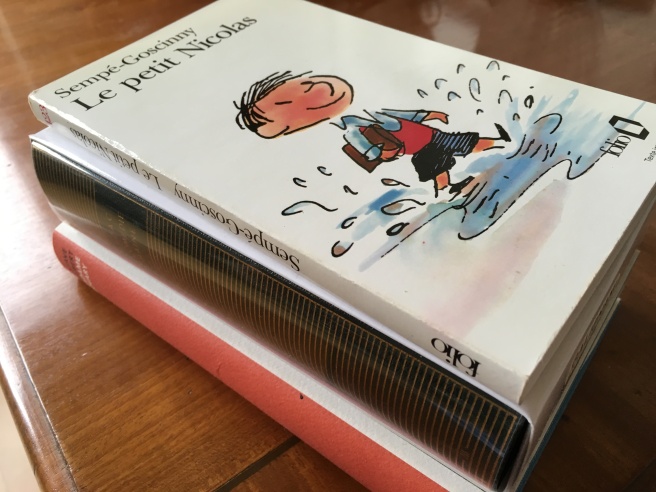 Today, I was confronted with my life’s awful truth. I have not grown up. Not at all. My mind is not yet of that certain age I am. Not at all. I still relate to Le petit Nicolas when I am re- and re-reading Goscinny’s stories, much more than I relate to these heroes of my own age, say Julien Sorel, Prince Bolkonsky or Tom Ripley, all these grown up people with their grown up problems, I still don’t tidy up my room, and for some ironic reasons I now have many more rooms to tidy up, even a kitchen and a bathroom, and I still get lectured by my mother about that mess I make each time she visits, I still eat way too many cookies while watching TV, always the whole box, and then I feel sick and want somebody to bring me some herbal tea, my mother or at least Antoine, the valet de chambre I’ve had as an imaginary servant ever since I was twelve or so, I was reading Dorothy L. Sayers’ Lord Peter Wimsey stories at the time, and I was so impressed with his valet, to have someone to draw your bath and serve you tea in bed and tidy up your wardrobe, because, really, one cannot expect me to arrange the sock department of my drawer all by myself, can one? I still hate to go to school, meaning to work, I am still counting the days until the holidays and I still wonder what I shall play with my friends after school and that test in arithmetic, meaning which bar to go to and which drink to have after that meeting with the account management. There’s only one thing that offers some hope that I might finally grow up one day. Lately, I started buying vases and flowers. Now, that’s a very grown up and responsible thing to do, isn’t it? 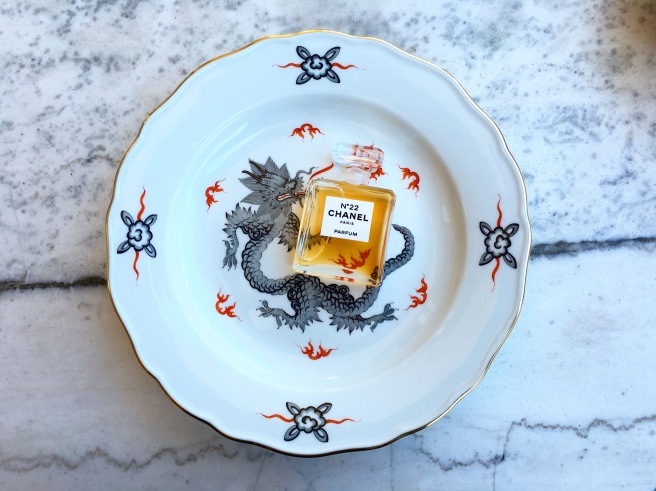 I really don’t know why people are making such a fuss about No 5. Okay, it has been the world’s best selling perfume since 1921, Marilyn Monroe wore it, apparently mostly when naked and in bed, but so did the doyenne at my very first agency, and rest assured, although she was the sweetest person who used to feed me with biscuits, I’m pretty sure no one pictured her in bed, let alone naked. Anyway, I digress as usual, my point is, I like Ernest Beaux’s No 22 from 1922 so much better. And like Karl Lagerfeld, I only care about my opinion. No 22 is like dessert. A very fine dessert, that is. Made of tuberoses and vanilla, cream and candied roses, with a little whisky in the cream, a single malt of course, even a harsh one, Lagavulin, just a tiny dose, a hint, but enough to add the strangest depth to it, transforming the femininity of all those fragrant flowers into a gentleman’s dessert, into some sort of diplomat cream, I once made one, a so-called crème diplomate Couloubrier, but it turned out as a real culinary disaster, marshmallows are sour in comparison, only my father who has the world’s sweetest tooth, would eat it, but that’s another story, where was I? Right, No 22. To put it in a nutshell, this perfume is an olfactory diplomat cream, and as this dessert was named after the famous Russian diplomat Nesselrode, known for his love for English puddings and desserts, No 22 is quite a manly scent. One cannot be any manlier than a Russian, can one?