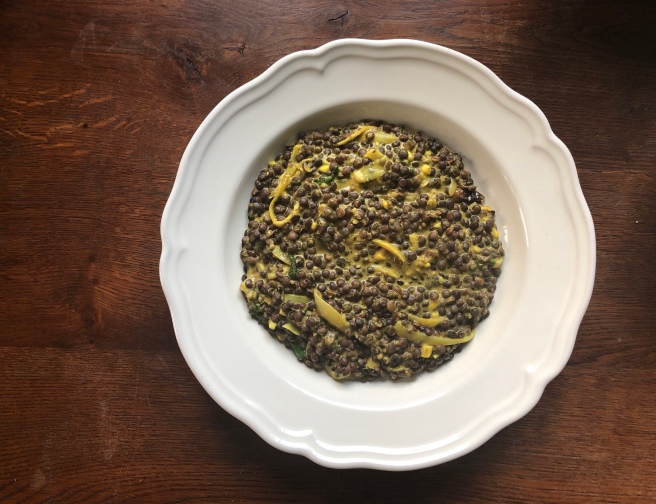 We ate all day. From 11 am on, we had everything one could ask for, I spent most of the time between 11:15 and 12:29 passing sliced duck breast on a bed of rocket with a very mustardy vinaigrette, tasting slighty Japanese, then there was none left, and people started asking why, why is that so good and why did you make so little, by that insulting and praising at the same time the life and death of the two ducks whose breasts had been sacrificed for our Easter brunch, but I at least was left alone then, at my end of the table were only the jugs with water, lemoned and pepperminted, and some of the minor salads, they weren’t paid much attention to, politics and a collectively hated friend, let’s call her Madame X, provided enough distraction anyway, at least until, very late in the afternoon, a lentil curry was served, prepared with none other than lentilles vertes du Puy, cumin, coconut milk, mustard seeds, red onions, chillies and coriander leaves, all of it interacted heavenly, creating something so good, everybody lost track of the conversation, time stood still, and those ducks, well, the poor bastards and their breasts, however good, had obviously died in vain, as they had already fallen into complete oblivion.

4 thoughts on “Too good to be forgotten.”