I have a thing for green things. First of all British racing green. And then trees of course. Especially the evergreen ones. Or when they insist on losing their leaves, the ivy covered ones, totally overgrown by this special sort of ivy with these beautifully pompous big leaves, blossoming in late summer, attracting flies and bees and wasps and all kinds of little flying things, I just love that, but I think I digress, actually I wanted to talk about my green briefcases. I bought both of them only because they were green. Taiga green the first one. Louis Vuitton. Bought it in 2000 in Hamburg. I remember that, quite idiotically, I had to take a taxi to make it on time to Hamburg’s Louis Vuitton store on Neuer Wall before closing time as I couldn’t wait another day for that briefcase. It’s turning 17 this year and, as it will soon leave me for some Ivy League college, I had to find a replacement. This time I had to travel to Paris – Zurich, however grand the Swiss love to think it is, has no Goyard store – and went directly to 352, rue Saint-Honoré where I picked their Senat clutch, while some cute dog and his mistress were trying on a variety of collars. For some odd reasons my credit cards weren’t working on that day, overstraining maybe, so I had to pay in cash, more embarrassingly so as the local ATM on rue Saint-Honoré spilled out nothing but small notes, really small notes, twenty euro notes, do you know how many twenty euro notes it takes to pay for a green Goyard Senat clutch? Lots of them, vast amounts, believe you me. Anyway, my clutch and I had a coffee on rue de Rivoli afterwards and have been inseparable ever since. Where is it actually? I think my lighter is still in it. 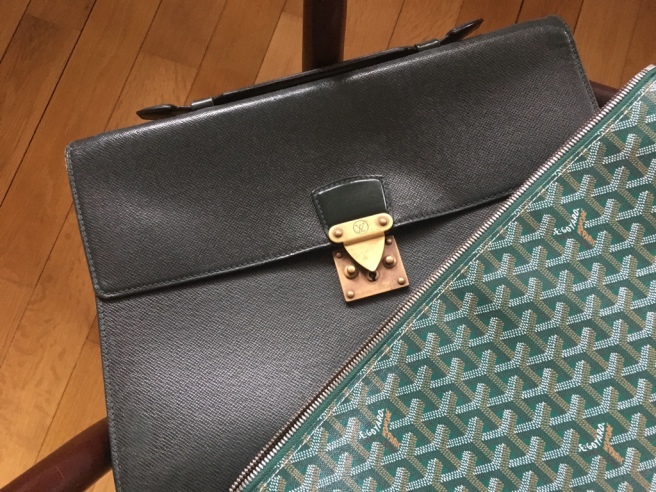