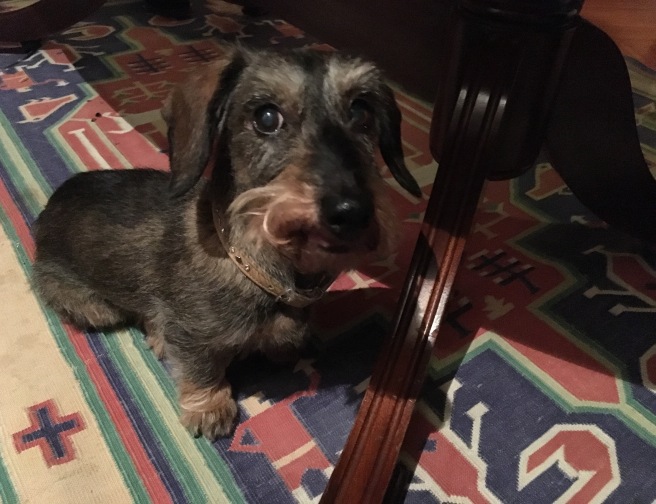 Christmas is nothing but a neverending dinner party, you never seem to leave the table, you’re stuck with opulent entrées followed by opulent game followed by opulent desserts, you have your glasses filled and filled again, you’re in a time vacuum in which you might have changed your clothes or even your fragrance, but you aren’t quite sure, have you? Different guests appear on the stage, others seem to have left, but when? You never know, the candles on the Christmas tree burn perpetually.
This year, however, this sempiternity was forever interrupted by Alma, the dachshund. Alma made me forget about eating and asking the person next to me for more wine, instead she had me crawl under the table where I metabolized most of the dinners by cuddling her ears, asking myself why I don’t have a dachshund, a question much more important than what the meaning of life is, as this one has obviously been answered, it’s to have a dachshund called Alma. While I tried to give her lop-ears the shape of Elsa Schiaparelli’s high-heeled shoe hat, still under the table while another dessert was being served, my mother’s famous Charlotte Russe, I promised Alma two dachshund boys for company, Gustav and Franz, some kind of ménage à trois of convenience, as I was sure she was a reincarnation of Alma Mahler-Werfel, and she surely had some unfinished business with these guys. I grabbed my iPhone and we listened to Mahler’s fifth symphony, and later to his Kindertotenlieder, ignoring the comments from upstairs, all these people wondering if I had lost my mind completely. Dachshunds are very loyal.