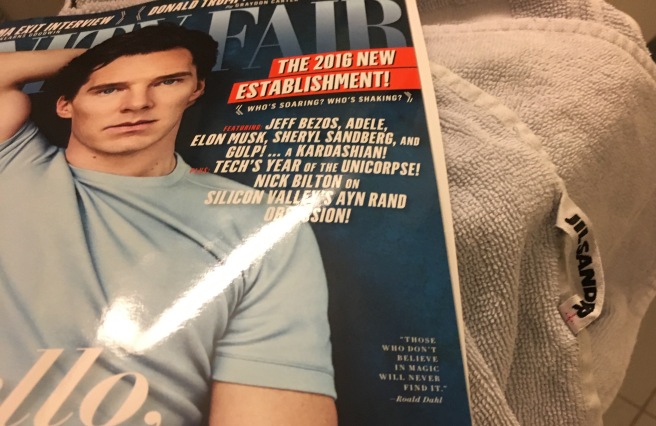 Soaking in the tub on a Wednesday night is a wonderful thing, sipping red wine from a glass wet with condensation, trying not to get your reading material wet while singing along to Benjamin Biolay’s Rose Kennedy album, novembre toute l’année, toute l’année c’est novembre, happily indulging in November tristesse although it’s only late October, but hell, one has to be prepared, eye creams come and eye creams go, you’re learning about new books, raising your brow at the latest gossip, getting to know Warren Beatty better, one of the guys you might have forgotten about otherwise, Vanity Fair seldomly disappoints, Benjamin Biolay features Marilyn Monroe, the volume goes up, I’m waiting for the neighbours to complain about it, suddenly realizing it’s still early, not like last time when Robbie Williams was screaming through the house, way past midnight, when I had to be so very apologetic to those people from downstairs, answering the door dripping wet, red like a fresh boiled lobster, wrapped in an ancient towel, Jil Sander from the early 1980s, part of what my mother ironically described as my dowry, with the old logo with the red plus sign following the name as it was originally designed by Peter Schmidt, they changed it in the 90s for whatever reasons, purism, I guess, but that towel hasn’t changed much, it might have lost some of its softness, but none of its style, and I can confirm that in that towel I was much better dressed than my neighbours in their matching comic pyjamas.